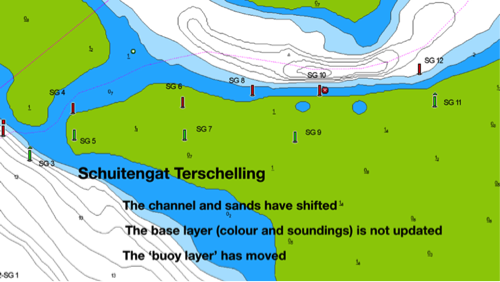 In previous articles we discussed some tools and methods to help us navigate. In this article we will focus on the foundation of navigation, the nautical chart.

Most of our modern charts still use the chart projection devised by Gerard Mercator in 1569. On paper charts it is easy to find the publication date, you can check whether the chart has been updated and you can even find the survey data. The source data on a single chart can range from 100+ year old lead-line surveys to shallow water multibeam surveys or even LIDAR data. The positions in the old data is less accurate, but it also gives spot measurements instead of mapping the whole seabed (IHO standards for hydrographic surveys). In areas frequented by commercial shipping the hydrographic data will be more up to date then in areas only used by pleasure boats.

Nowadays many sailors use a chart-plotter or similar device. This is basically a computer assisted navigation system capable of displaying electronic nautical charts and the vessel’s position in near real time. The used electronic charts are derived from paper charts, with their inherent inaccuracies. Finding information about source data is more complicated because this information is hidden in Menus of the electronic chart system (Chart plotter, iPad or Navigation computer).

There are two sorts of electronic charts, the raster chart and the vector chart.
In a raster chart, data is a digitized image of a chart comprised of millions of pixels. All data is in one layer and one format. The video display simply reproduces the picture from its digitized data file.
Most electronic chart systems nowadays use vector charts, partly because the file size is much smaller. Vector chart data is organized into many separate files or layers. It contains graphics files and programs to produce certain symbols, points, lines, and areas with associated colors, text, and other chart elements.
Depending on zoom-levels, details (layers) will disappear from view. This happened on Vestas Wind (Volvo Ocean Race, Nov 2014) when they ran aground on the Cargados Carajos Shoals about 240nm northeast of Mauritius. You definitely need to zoom out for overview and zoom in for details!

In the electronic chart system, the accuracy of the gps is combined with the electronic charts which are based on paper charts, and thus far less accurate.
Especially in environments like the WaddenZee with shifting sands and channels, chart information gets out-of-date quickly. The base-layer of the chart is ‘fixed’, and buoys are in a separate layer. When a hydrographic survey discovers that the channel has moved, Rijkswaterstaat (RWS) will reposition the buoys and inform everyone via a Notice to Mariners. The layer of the chart containing the buoys is updated, but not necessarily the base-layer. On an electronic chart system, it seems like you’re driving over the sand-plates, while you are actually in the fairway. The chart of Schuitengat (Terschelling) indicates a drying height of 1m, while the present depth is around 1.4m at LAT (source: Brandaris). 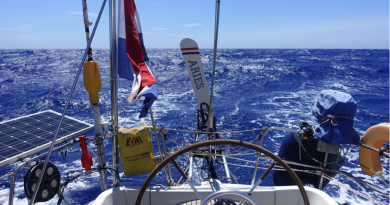 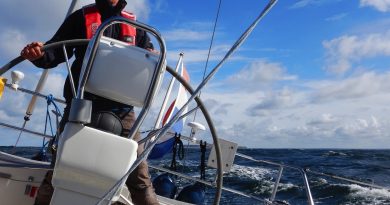 RYA-tips #23 – Safety culture; looking to blame or to learn? 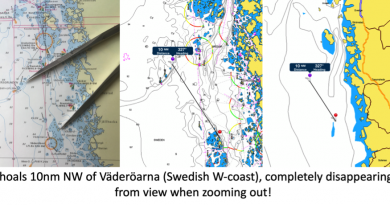 RYA-tips #41 – Electronic charts -Not to be used for navigation-